If you are an experienced musician, you probably are already familiar with the Nashville Number System or have at least heard of it. For those of you who are not familiar with it, it is definitely a useful system to know.

The Nashville Number System (also just called the number system) is a way of writing the chords to a song in a "universal" or neutral key using numbers instead of chord names. This way the song can be played in any key at any time with out rewriting it.

We start by taking the key the song is in and writing the scale. For example if we are in the key of D, we write a D scale.

We then assign numbers to each of these notes.

Now each of these numbers becomes a chord.

These chords are then used in songs.

This is just a very brief look at the system. For a better understanding you should check out The Nashville Number System Ebook. 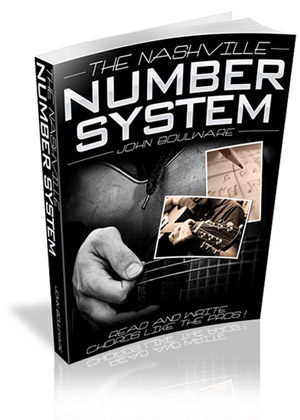 So why is this useful?

Now you're probably asking, "Why would I take the time to do this?" The answer is simple: because everybody in the music industry uses the Nashville Number System. You know, 'when in Rome'? In fact, most Pros and good amateurs will usually assume you already know how to use it.

But WHY does everyone use it? When you write out a song in numeric notation like this, the numbers can be applied to any key. So this example can now be translated to C instantly:

But what if you're in the studio and the lead singer says "It's a little too low, let's go to D." Easy. Use the formula:

Obviously you wouldn't be rewriting this every time. The more you use this and the more familiar you are with your scales, the less you have to think about it. "1 4 5 in D? Easy, that's D G & A."

Or you could just start on E♭ and use the same numbers you already had. See why we use it now?

If this still seems a little hard at first, just trust me. When you learn your scales and numbers, it is a bazillion times easier than the other way. And THAT is why everyone uses the Nashville Number System.

Again, this is just a very brief look at it. Click here to learn more about it.